In the framework of the National Species Action Plan for Northern Bald Ibis, Geronticus eremita, prepared in 2008 by HCEFLCD (High Commission for Water and Forest and Fight against Desertification) with its partners, monitoring NBI is one of the main aspects to follow population dynamics. Collected data are essential to take any decision to manage the last viable NBI population in the world.

1. Wardens
Seven wardens are recruited with the cooperation of Prince Albert II of Monaco Foundation, 4 in Souss Massa National Park and 3 in Tamri area.

2. Site C
Dummies installed at site C faded and are currently dusty. They are not efficient and should be retired.

3. Disturbance
Breeding sites didn't suffer too much disturbance by tourist, compared to previous years. 12 visitors, 9 of them birders, approached Tamri site and two photographers went close to sites A and F, in the Park.
Nevertheless, this year site E was very frequented by fishermen just at the beginning of the breeding season. Wardens, assisted by rangers kindly persuaded the fishermen to leave. 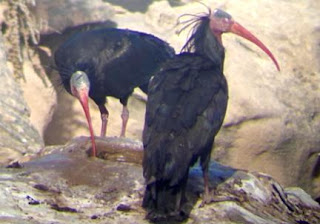 4. Waterpoints
Waterpoints are daily cleaned and filled with fresh water by the wardens, during all the breeding season. Their monitoring showed a regular use by adults and, later, fledgings.

Breeding season started in Tamri by the first week of February and finissed during the last week of Mai. Unlike the previous year, in 2013 60 pairs produced fledgings from 161 hatchlings. Although survival is relatively low (44%), productivity (1,1 fledgling/nest) is satisfactory.
In SMNP breeding started later, by the first week of March, and finished in mid June. A lanner falcon prevented ibises to nest at site B (that usually holds 6 pairs), thus only 53 pairs nested and 77 fledging survived from 101 hatchings (survival 76%; productivity, 1,4 fledgling/nest).
Altogether, 118 pairs were formed, 113 nested successfully and produced 262 chicks 148 of whom fledgled (survival rate, 56%, productivity, 1,3 fledgling/nest).

Table 1. Results at the different sites.

Differences with 2012 (Table 2) are due to the good weather conditions, with rains well distributed between September 2012 and April 2013.

The number of pairs is the highest since the creation of the Park (Figure 1).


The number of chicks produced also increased (Figure 2), despite the relatively low survival rates observed in Tamri site, and it's one of the highest even recorded.  This mortality could be explained, among other things, by a shortness of food resources available in a region in which there is more disturbance from human activities (tourism development, nomadic herds, ...).

Regular census shows that before breeding there were 319 individuals. After breeding, the number rose to 443 birds (Figure 3) .

The gap between both figures some years reachs more than 100, meaning that a number of birds disperses outside the prospected area.

It's worth to note that just after breeding, most ibis from Tamri region move to the limits of Souss-Massa National Park. In 2012 this displacement occurred even before, due to the failure of breeding at Tamri (Figure 4).


SMNP role is essential for the survival of the species.

After the original report by :
Widade OUBROU & Mohammed El Bekkay
Posted by SEO/BirdLife Morocco Programme at 12:55