History of a confusion (1)

Conrad Gesner or Geßner was a Swiss naturalist very respected in his time and in the centuries that followed. Many consider him the father of modern zoology due to his Historiae animalium, more than 4500 pages in five volumes. The first four, devoted to mammals (Quadrupedes vivipares), herps (Quadrupedes ovipares), birds  (Avium natura)  and aquatic fauna (Piscium & aquatilium animantium natura) were published between 1551 and 1558, and the last, dedicated to snakes and scorpions was posthumous. The first four volumes were translated into German in 1563 under the title Thierbuch. It’s one of the first natural history works that include colour illustrations of animals and their environment and the first that includes fossils.
Gesner studied in many European towns: Strasburg, , or , in addition to . He’s the first author to give a unequivocal and clear depiction of Northern Bald Ibis. 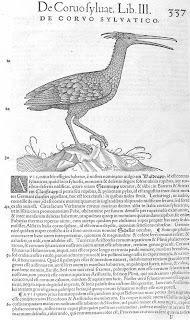 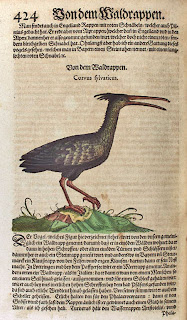 Gesner’s engraving represents a young NBI in a realistic way. We can here see reproductions of the Latin and German editions.
Conrad Gesner died of plague at the age of 49 during one of the epidemics that followed the great pandemic called the black death.
Those interested in Gesner’s work can find his work scanned in the web. The third volume, Avium natura, is here.

Pope Gregory XIII will always be remembered for commissioning and being the namesake for the Gregorian Calendar, conceived to avoid Christmas being celebrated in summer.  During his time, he was better known for his political activity, being behind many religious plots, including  St. Bartholomew's Day Massacres of Huguenots (August, 24th, 1572) and wars involving most catholic kingdoms against Othoman Empire and England.


Nevertheless, his cousin was Ulisse Aldrovandi’s mother, and this allowed this naturalist from to be reinstated in his public offices (he was suspended for a dispute with the official University authorities) and to request financial aid to help him publish his books. In the volatile religious atmosphere of his time, he was also arrested for heresy. He didn’t travel too much and spent most of his life in , where he died at the age of 82.

Among his works, stands Ornithologiae, published in several volumes which we can consult on line at the virtual library from Bologna University. The third volume (1603), devoted to  birds with webbed-feet, includes, in chapter LVI, the Phalacrocorace, or aquatic ravens of Pliny. The previous chapter, devoted to the cormorant, Corvo aquatico, clarifies how this differs from the following group. Sheet 268 shows the very famous and fine image of Phalacrocorax ex Illyrio missus, that is the "bald raven from ".. 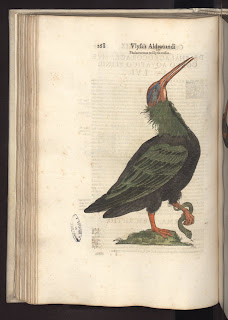 
Turning the page we find a surprise. Aldrovandi took the image from Gesner’s Corvus sylvaticus, as if it was a different species. The print is a mirror image of the original, which is normal when you copy to a woodcut or a copperplate, that is printed in turn the other way round.

Obviously, the inclusion of two versions of NBI in a volume, particularly one dedicated to web-footed birds is really quite odd. 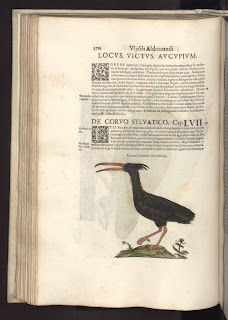 Keeping in mind the means available at that time, it’s logical that authors copied each other and that, in some cases, they tried to guess whatthe previous author was describing. Aldrovandi identified Gesner’s ibis as another species, probably because this was a juvenile, with its feathered face, which presumably caused the mistake. But Aldrovandi cites also Bellonius, who is no other than Pierre Belon. This French naturalist published, also in 'Histoire de la nature des oyseaux considered one of the first works of comparative anatomy. Among other quotations of Belon, Aldrovandi includes in chapter LVI another Phalacrocorax , this time Phalacrocorax Bellonii. However, this time it is a web-footed bird. The illustration is quite confusing. 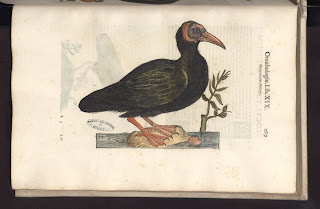 Which bird is this? Many other illustrations in the book are difficult to identify, but this one is particularly puzzling. We should reject cormorants and mergansers, which are well illustrated in other chapters. What is, then, Phalacrocorax Bellonii?

Syria: no success for the breeding pair this year

We have heard from the team that the breeding pair has failed to fledge any chicks this year. This is obviously a serious blow. In addition, the captive pair in Syria has also been unsuccessful, but did get rather closer to breeding than last year. We will give further details as they emerge, and will update the progress/movements of the male, Odeinat - apparently the only bird with an operational tag at the moment.

One piece of more positive news is that the semi-wild Birecik population in Turkey had a far better breeding season than usual with around 38 juveniles fledging.
Posted by SEO/BirdLife Morocco Programme at 17:27 1 comment:

Syria, no success for the breeding pair this year

We have heard from the team that the only breeding pair in Syria has failed to fledge any chicks this year. This is obviously a serious blow. In addition, the captive pair in Syria has also been unsuccessful, but did get rather closer to breeding than last year. We will give further details as they emerge, and will update the progress/movements of the male, Odeinat - apparently the only bird with an operational tag at the moment.
One piece of more positive news is that the semi-wild Bireçik population in Turkey had a far better breeding season than usual with around 38 juveniles fledging.

(from http://www.rspb.org.uk/wildlife/tracking/northernbaldibis/)
Posted by SEO/BirdLife Morocco Programme at 00:00 1 comment:

The wonderfull collection of digitalized codices from Sankt Gallen Abbey library, in Switzerland, one of the oldest and richest medieval libraries in the world, offers us a very special work of great interest to know about Northern Bald Ibis historical distribution.

The manuscript includes Four-part vocal pieces for holy days of the church year, and it's numbered 542 in the catalog.


Prince-bishop Diethelm Blarer ordered Italian composer Manfredo Barbarini Lupo, from Correggio, composed these challenging vocal pieces, Father Heinrich Keller (1518-1567) wrote the text, and the manuscript illustrator Kaspar Härtli from Lindau on the northern side of the Bodensee illuminated the first pages with the important holy days of the church year.

Some of the sheets show an important number of birds, not to scale. 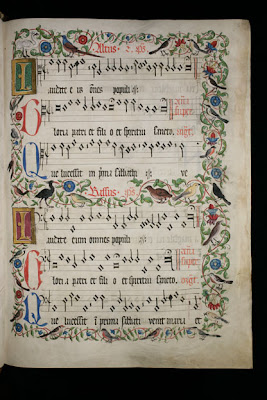 Page 5 shows, among goldfinches, crossbills, wagtails, robins, wrens, bullfinches, and some other birds difficult to identify, probably the finest, most accurate image in the group, a young northern bald ibis, proving a familiarity of the artist with the bird.