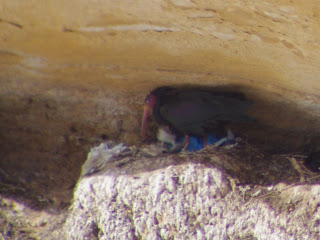 As it happens with many birds, NBI gather nesting materials from the neighbourhoods and those available materials are sometimes rubbish. Thus, plastic bags and other refusal can be found inside the nests.

Occasionaly, some of those materials are fishing lines made of nylon, wich is a very longlife material.

Unfortunately, this choice has very dramatic consequences on the survival of chicks. 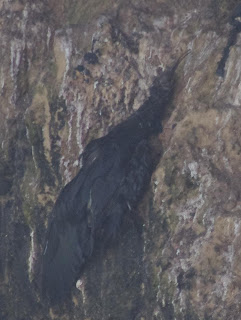 To avoid this situation, our wardens systematically recover fishing nets and lines around the colonies, they aware fishermen to dispose properly those materials but they also provide abundant safe nesting material close to the nesting sites. 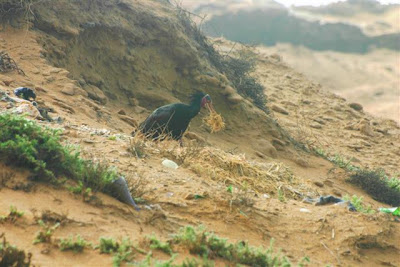 Email ThisBlogThis!Share to TwitterShare to FacebookShare to Pinterest
Labels: Conservation 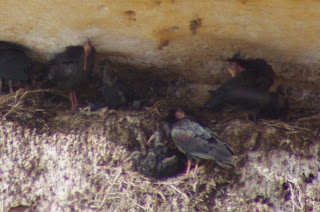 As ibises don't lay at the same time, chicks could also have very different ages. In fact, besides big chicks there could be also unhatched eggs, as seen in the next picture.

Ibis lay, in general, three eggs that hatch after 24-25 days. During the 40 to 50 days that last the development to fledging, is not unusual that some chicks dye, thus it's normal that just one or two of the chicks fly per nest. In fact, average breeding success last year was 1,3.

Posted by SEO/BirdLife Morocco Programme at 08:02 No comments:


In late 2009 the IAGNBI members celebrate a meeting in Palmyra, Syria, in order to explain the activities and results for every population of NBI and also to go forward in the conservation of the species.

One very special result of this meeting was the announcement of the initiative of transfering two ibis from the Bireçik colony to join the Syrian group.

Amina (female) and Ishtar (male) were 2010 youngsters from Bireçik, Turkey which were released in Syria after a brief settling period. This is the first time such a release had been tried and they successfully migrated to Southern Saudi Arabia guided by Salama and accompaigned by Ameer.

Ameer hatched in the wild in 2010 in Syria and is the offspring of Odeinat and untagged Zenobia - who sadly died after being found in a very weak condition two weeks after leaving Syria in southern Saudi Arabia.

After the hardest part of the migration flying through Arabian desert, the three young birds stopped transmitting and it appears they didn't survive. Anyway, the result of this experience was extremely positive because it was the first time to prove that young birds could migrate with a stranger to the South and opens a new area of conservation biology on NBI.
Posted by SEO/BirdLife Morocco Programme at 18:00 1 comment: