GOOD NEWS!
The signals from our two bald ibis have revealed that they have left the area north of Agadir, where they were feeding and sleeping in a nearby cliff, and have moved to the Souss Massa National Park. 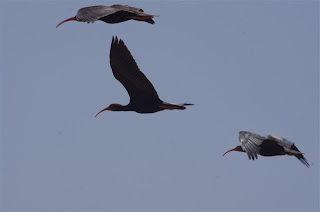 Nader and Aylal are still together, although the signal from Aylal is more accurate due to the GPS tag. In the last few days, this bird has been in the steppes area around the Massa estuary, accompanied by a large number of other ibis.
Studies of habitat availability and use have indicated that this national park area is very important to this species outside the breeding season.
The fact that we caught and tagged two related individuals is great as it will provide valuable insight into when the separation of juveniles from their parents occurs.
Posted by SEO/BirdLife Morocco Programme at 00:00 2 comments:

Dublin Zoo helps fund a number of in situ conservation programmes. While maintaining breeding populations in zoos is beneficial, it is of paramount importance that wild populations and their habitats be understood and conserved.

The Northern bald ibis is one of the most endangered birds in the world. The Souss-Massa National Park in Morocco and surrounding area is vitally important for this species survival as the entire population breed within this area. The main threat to this species is the increase in leisure tourism and the subsequent disturbance to Waldrapp ibis nesting sites and feeding areas. 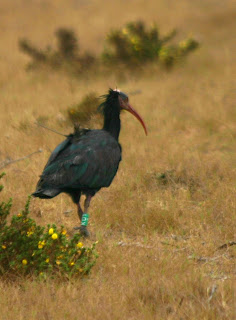 A National Species Action Plan was drawn up and one of the priorities was the satellite tagging and colour ringing of some birds to discover more on this species’ seasonal movements and area use outside of the national park.

In 2010, Dublin Zoo provided funding for satellite tagging, but the capture of an adequate bird should be done just after breeding. Thus, in July 2011, one adult bird, named Aylal, was equipped with a GPS tag that allows to know accurately where's the bird, thus permiting to identify key sites or potential threats.
Posted by SEO/BirdLife Morocco Programme at 10:46 2 comments: