It seems that in recent weeks, Nader and Aylal have met again.
The data received from their tags indicate that both are back in the northern area of ​​, confirming the great importance of preserving this area where ibis spend a large part of the year, using the large and rich feeding areas.
They have probably lost their family behaviour due to the time they spent appart, but they move in the same group at least during part of the day.
Posted by SEO/BirdLife Morocco Programme at 00:00 1 comment:

Attempts to attribute historical events to variations in climate are often criticised but there is no doubt that climate has always had a huge impact on humans, affecting the success of harvests, disease epidemics and many other events.
In the not too distant past, experienced a remarkable number of climate changes. From the tenth century, warm temperatures in the region allowed vineyards to be cultivated in and the Vikings were able to migrate northwards and colonise parts of and . 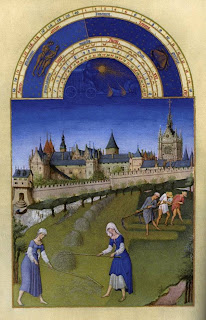 This Medieval Warm Period allowed humans to cultivate areas further north and at higher altitudes. The milder climate and the expansion of crops and pastureland probably resulted in other species expanding their ranges as well.
The name of  Waldrapp  (forest crow) seems to link the northern bald ibis to woodlands, an ecosystem that now seems shocking, but maybe in the medieval warm period NBI was not uncommon in the clearings of the alpine forests.

The climate in then became cooler, and from the second half of the seventeenth century to the mid-nineteenth century there was a period of intense cold, referred to as the Little Ice Age. This led to massive changes in agriculture and to the abandonment of crops at higher latitudes and altitudes, in addition to the loss of pastureland, as it was replaced by forests. Weather conditions would also have become more severe and it would have been much more difficult for birds to have crossed the on their migration routes. The loss of the northern bald ibis from has been attributed, at least in part, to this cold period. 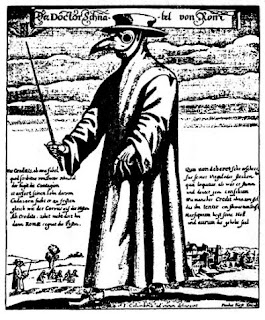 There were other events which occurred over this period, such as the constant wars and the Black Death of the fourteenth century, which would also have resulted in population declines over large areas. The picture above shows a physician dealing with the plague, wearing a birdlike mask. Could it represent some kind of crow? Maybe, but the beak is too long and curved….
Informative scientific documentation for these periods is abundant, detailing changes in glaciers, sedimentology, floods, droughts, heavy snows, famines and the price of grain, all indicative of weather conditions at the time.


Unfortunately, there is less information about changes in wildlife but it seems that apart from the disappearance of the bald ibis, there was a reduction in the range of the Alectoris partridge (called Steinhuhn in German). This species was apparently common in the in the 16th century but it now has a much more southerly distribution.

It has been mentioned in previous posts that the tags on Aylal and Nader have different levels of accuracy and this is due to the fact that two different systems are being used: and GPS. Both tags use the system but one tag also has a GPS transmitter.


The system is named after the mythical giant with 100 eyes, who was the perfect, all-seeing guardian. This system is based on a series of six polar-orbiting satellites, i.e. which pass over both poles, at an altitude of 850 km. These satellites belong to the National Oceanic and Atmospheric Administration (NOAA) and the European Organisation for the Exploitation of Meteorological Satellites (EUMETSAT) and other agencies will join in the future.

Each platform, i.e. the animal or object carrying the transmitter, can be reached, in theory, about 14 times per day. The position of the platform is calculated using the Doppler Effect, i.e. the variation in the wave frequency (produced by the transmitter) between two objects moving relative to each other (in our case the transmitter and the satellite).

With the system there is a certain limit to the number of locations that can be received from each transmitter but it is ideal for following long-distance movements of birds. It is also small and light - the transmitter on Nader weighs just 9 grams (1/4 ounce).

The transmitter on Aylal also carries a GPS unit. The GPS system relies on a denser system of satellites, with 24 satellites (four in each of six different orbits), at an altitude between 10,100 and 20,200 km. Each transmission from the platform is picked up by several satellites and the position can be calculated by measuring the distance from each one. This provides an accurate, three-dimensional location (latitude, longitude and altitude). Not surprisingly, this accurate technique was originally developed for military use.

GPS satellite network, showing how the number of satellites visible from the transmitter varies according to the earth’s rotation and the orbit pattern of the satellites (from Wikipedia)

This type of transmitter was deployed on Aylal to provide us with detailed data on small-scale movement patterns of the species within its normal range. This will help us to identify any potential threats and will complement the day to day work done by the guards on the ground. The transmitter on Nader will provide us with more broad-scale data on the large-scale dispersal patterns of juveniles of this species. This is the same system which has been used to tag ibises in and .

Funds for these two tags were donated by Dublin Zoo (Aylal) and RSPB (Nader) and installation costs were covered by a collaborative project with Prince Albert II of . An expert from MMARM led the tagging operation and provided advice on the capture and taggingprocedures.

The fundraising campaign for the conservation of the bald-headedibis aims to raise money to buy more transmitters such as these, to tag moreindividuals. The data provided from these tags greatly increases our knowledgeof species movements and habitat use and allows us to identify potentialthreats.