Where are the ibis now?

Aylal and Nader are still apart – Aylal (the adult) has spent a few days moving around the area north of Agadir but hasn’t remained in the same specific location for any length of time. Nader (the juvenile) is still in the SMNP. Although it was known before that Tamri birds visited the Souss-Massa area outside the breeding season, the data from Aylal and Nader are providing important details on the frequency of these movements.
Posted by SEO/BirdLife Morocco Programme at 00:00 1 comment:

Latest news from “our” ibis in Souss-Massa: Nader and Aylal have separated

The signals received from Aylal show that she moved north at the beginning of last week, back to the area where she was caught 2 months ago and she has been using the same roosting and feeding areas as before. 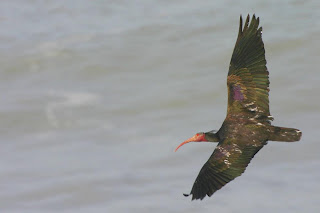 While the accuracy of the transmitter on Nader is lower, we saw that this bird also moved north, but was in the vicinity of Tamri, near the river mouth. Soon after, it returned to the Souss-Massa National Park, so it is apparent that the parent and its young have separated, at least for now.
Although the information provided from Nader is less accurate than for Aylal, keep in mind that up till now we had no data at all on the relationship between parents and their offspring after fledging, so this represents a big leap forward in our knowledge of this species. It is possible of course that the other parent is still with Nader, but this is unlikely.
Posted by SEO/BirdLife Morocco Programme at 00:00 2 comments:

The latest data received from the satellite tags show that Aylal and Nader (a mother and her offspring) are still active and are within the Souss-Massa National Park.

These two birds were tagged at the end ofJuly near Agadir and then moved, most likely with the whole group of about 20 adults and young ibis, to the National Park.  This movement is normal outside of the breeding season as there is plenty of food available at this time of year in the north of the park. Aylal (the adult bird) will most likely remain in this area for several months until the breeding season begins again. Thanks to the highly accurate GPS data we know that it only uses about two feeding sites, all within the protected area. As for Nader, we’ll have to wait and see – it may remain with the rest of the group or it may disperse to a new area within the next few weeks, as many juveniles do at this point in their lives.
Posted by SEO/BirdLife Morocco Programme at 00:00 2 comments: