As in most waders, sexes in NBI are similar in plumage, although males are generally larger than females. For instance, males have slightly longer wings than females (403-420 vs. 390-408 mm). As with other ibises that breed in colonies, males have also longer beaks.

Babbitt et al. (2007) made an analysis of sexual dimorphism in ibises. Using all 16 species for which sufﬁcient data were available, they found that the degree of sexual dimorphism in proportional bill length was positively associated with the incidence of colonial breeding (r = 0.68, P = 0.005). On the other hand, the degree of sexual dimorphism in proportion to bill length was not signiﬁcantly associated with the incidence of group foraging (r = 0.36, P = 0.18). The incidence of colonial nesting and group foraging were correlated (r = 0.55, P = 0.03) with each other, but not as strongly as the degree of sexual bill length dimorphism and colonial breeding. That means that males of gregarious breeding ibis species, like NBI, tend to have longer bills than females.
Size matters: Longer-billed males are more successful in attracting a mate.

Regarding the differences between the two populations, NBI have longer bills in Morocco than in Turkey. There's not a known reason for that, but the sexual dimorphism still exists in both populations.

Nevertheless, the difference is very small, about 5%, to be realised in the field.

Northern Bald Ibis have had an important role in human culture. In addition to the religious and symbolic meaning for ancient Egyptians, in other places where it has existed has also been considered in many senses, as in Algeria. This is probably due to the behaviour of the species, which could be quite tame to people.

In Souss Massa National Park, coexistence between NBI and people has been exemplary, permiting the bird to survive in this region in spite of its extinction anywhere else. 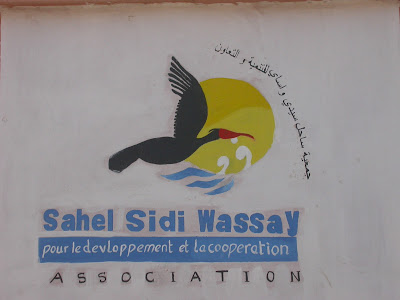 Sidi Wassay is a village besides oued Massa stuary and was among the first to cooperate with the Park and SEO/BirdLife in the implementation of human and economical development. Thus, many women received primary education and the first group of beekeepers was also organised managing a comunal apiary sharing 40 hives (see more about this cooperation in Spanish or French)

Furthermore, Sidi Wassay is a place where NBI is quite easy to observe, due to high quality feeding grounds and its strategic situation inside the National Park. These are, maybe, the reason to choose this bird as a mascot by the Sahel Sidi Wassay Association for Cooperation and Development and the Chabab Sport Club. 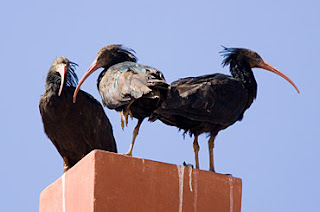 Some authors explain how the species used to nest on towers and ruins, but also that their ckicks were a delicacy for epicures. Fledglings are abundant on early representations of NBI, probably showing a familiarity to young birds kept in captivity for human consumption.
In fact, among the first text talking about the species in early 16th century, there are several decrees punishing the capture of this species, reflecting the importance of this prosecution in Europe.
Eleazar Albin writes in the 18th century they build for the moſt part in high Walls of demoliſhed or ruinous Towers which are common in Switzerland and later The young ones are commended for good Meat and county a Dainty; their Fleſh is ſweet and their Bones tender and, later, ... deſert places; where they build in Rocks and old forſaken Towers.

On the other side, the Turkish town of Bireçik held about 500 pairs by the middle of last century and reached an estimated total population of about 3,000 around 1930. NBI was higly regarded by people there, due to the myth of Noah and several religious beliefs. According to the local legend, Noah released kelaynak, the bald ibis, who leads the Ark to a place where they were established.


It was also believed that the ibis migrated to the South each year to guide Hajj pilgrims to Mecca. A festival was held annually to celebrate its return north, also as a symbol of spring.
By the 1970s, the urban development and the loose of traditions led to the deterioriation of the colony and pesticides contribute to the decline.

Although we don't know a particular mithological or legendary status on Northern Bald Ibis in Moroccan traditions, there are records of colonies on emblematic buildings.
There was a small colony on some ksours (adobe fortified houses) in Aït Benhaddou, as shown in the documentary French  The Oued. Those nests were apparently removed in the 1970s when the old buildings where mended for a film shooting.

Currently, the two surviving population are still quite tame. Although they seek for quite and inaccessible sites for nesting, when looking for food they are more confident. It's possible that insects are more abundant close to humane shettlements due to home refuses or livestock dung.