Although young NBI records are not extremely rare in the Atlantic Sahara, specially in Boujdor, every single sighting is very important to understand the behaviour of the species. 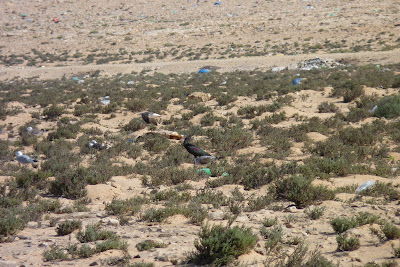 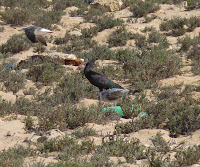 Recently, Hugues Dufourny reported to http://www.go-south.org/ the sighting of one sub-adult bald ibis at Boujdour, on December 27th.


On the pictures (©Véronique Buchet) we can observe the kind of habitat on the coast in the region, while the dominant area is much more drier. Constant wind makes plastics fly and they stay on the browses.

In the same site web, Runar Jåbekk cited two other NBI at Boujdour in february 2012.

Every single sighting of Northern Bald Ibis outside Tamri and Souss-Massa area is extremely important to improve the knowledge on the species and improve its status. Please, share your redords with us.
Posted by SEO/BirdLife Morocco Programme at 12:51 1 comment:

Monitoring takes place thanks to the seven wardens that are permanently on place, supported by Prince Albert II of Monaco Foundation.

While in the protected area results were quite usual, similar to previous year, in Tamri we have recorded a failure on breeding success. Thus, in Souss-Massa 34 pairs nested (two less than in 2011) and 95 chicks hatched (one less that in 2011). 56 of them fledged (vs. 79 in 2011), thus survival was lower that last year (1,03 against 1,3). Nevertheless, at Tamri there were less pairs formed, 43 vs. 51 during the previous season. This should not be a problem, but just 11 of them lay eggs. None of them finished the incubation period.

It is not clear what the causes of the failure are, but, comparing this situation with previous years, we found that results were also bad in 2008. That year, there were 55 fledgings in Souss Massa and two in Tamri.

Although many factors could affect breeding, we found that 2008 was also a dry year; the first trimester had just 21 mm being the average for that period 99 mm. In 2012 rainfall was jus 6 mm in that period.
Posted by SEO/BirdLife Morocco Programme at 19:17 1 comment: