After being fitted with individual transmitters, two bald ibis can now be tracked by satellite. This project was made possible by a collaboration between the High Commission for Water and Forests and the Fight Against Desertification and SEO/Birdlife, along with the participation of other organisations. An adult will carry a transmitter donated by Dublin Zoo and a young fledging will carry one donated by the RSPB. Both will be automatically recharged using sunlight, which will enhance their lifespan. This activity is considered a priority in the Species Action Plan, both nationally and internationally and all the required permits have been obtained.

One expert from the wildlife management unit, from the General Directorate of the Natural Environment and Forest Policy of the Spanish Ministry of Environment, Rural and Marine Affairs, travelled to Agadir to support us in this project. The birds were caught with special traps, which had been designed for this particular species and habitat, to prevent any harm to the birds. The team was compossed by staff from Morocco Country Program of BirdLife and from the . The knowledge and experience of the local wardens was particularly invaluable in determining the best location for catching the birds.

On July 19th, the first bird was captured in an area north of Agadir. This adult was thought to be a female and was released without any problems, carrying a 30g GPS tag. At dusk, Mahdi Boujmaa, one of the guards, confirmed that the bird had gone to roost and was in perfect condition. The next day we tried (unsuccessfully) to catch in an area further north but the ibis had moved further south to feed. On day 21 we tried again in the first area but the ibis seemed suspicious and we spent most of the day trying to catch them. We also saw the bird which had been fitted with a tag a couple of days earlier. It can be seen in the picture below – it was feeding normally and the tag didn’t appear to be causing any discomfort.


You can see the transmitter and antenna in the photo, on the leg and resting on the ground, and the PVC ring for remote reading.
Have you seen how they catch their prey? Look in the picture below how it grabs the scorpion by the sting. Undoubtedly this is a skill learned when they’re young, demonstrating the importance of learning in these birds. And to think that we’d been sitting on that ground all day!


Finally we managed to catch another ibis. This one was a young one, which fitted perfectly with our plan. The adult, equipped with the GPS transmitter will allow us to monitor feeding and resting areas within the National Park, while the young bird, which will probably travel over much greater distances, was fitted with a tag which will provide less detailed information, but will still be sufficient to enhance our knowledge of juvenile dispersal patterns.

The adult was named Aylal, which means bird in Amazigh, and the juvenile was named Nader, which means rare in Arabic, and both perfectly describes the status of this species. While we were handling the juvenile ibis, the rest of the group, about 20 birds, waited nearby. When Nader was released, the whole group flew off and circled around, waiting for the juvenile to join them. We couldn’t help but feel a deep emotion, seeing the social character of this species and the care given to their young. 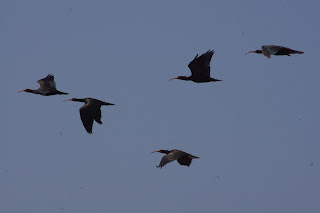 Two days later, Boujmaa called us to say that Aylal had been seen feeding Nader, so it is the parent, probably the mother – what a coincidence! And this may allow us to learn about the family life of this species as well.

Soon we will be able to provide more information on Aylal and Nader, as the data from the satellite tags becomes available.

The funds raised through donations helps to enhance activities such as this, both by funding the daily work of the wardens, and to fund similar tagging projects in the future. Help us to preserve Northern Bald Ibis.
Posted by SEO/BirdLife Morocco Programme at 08:00 1 comment:

En español
Although NBI are get probably most or the water they need from their food, they obviously need to drink and can usually be seen on the natural sources of water, like in Wed Tamri mouths.

In particular, chicks seem to need some water while in the nest. Between 1998 and 2002, the Souss-Massa National Park and BirdLife team monitored the use of some artificial water points close to the colonies and the subsequent impact on reproductive success.
It was showed experimentally that the small-scale provision of fresh water near the breeding colonies led to an increase in the survival of chicks.
The increase in productivity was highest in years with low natural rainfall but was positive throughout the wohle period. The supplementary fresh water appears to help buffer productivity against the impacts of low rainfall.
Since 2003, water provision is a part of the ongoing conservation measures for this species.

Breeding monitoring is ensured by the guards from the Bald Ibis Conservation Project and supervised by Souss-Massa National Park staff. This allows you to record all the parameters related to reproduction, as the number of couples, the number of chicks hatched and the number of chicks that flew. In 2010, the NBI started nesting in the second week of February and finished in early June. Throughout the region 118 pairs were formed, of which 69 were in the national park and 49 in the Tamri colony.
However, only 105 came to lay eggs, of which 57 were in the park and 48 Tamri. This is probably explained by the inexperience of some young couples and sometimes by the lack of space in certain colonies.
A total of 138 chickens left the nest, that is,  10 chicks more than in 2009. 80 arrieved to this age in SMNP and 58 inTamri; the productivity en Massa is 1.4 chicks /pair in Massa and 1.2 in Tamri. The average of 1.3 chicks / pair have left the nest in 2010 represents an improvement over 2009 when reproductive success was only of 1.1chicks / pair.

The monitoring of reproduction has allowed to register an increase in the number ofbreeding pairs. 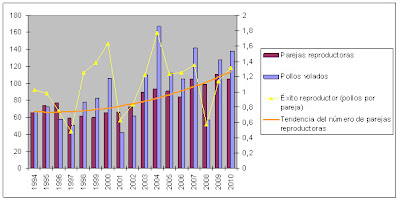 At the beginning of the conservation NBI conservation project, in 1994, the number of breeding pairs was 65. It grew significantly until 77 in 1996. That year, the unexplained mortality of 38 adults caused a reduction in the number of pairs to 59. The population didn't recover from that loss was until 2000, which again reached the initial number of pairs. Since 2007, this number exceeds one hundred.
The graph also shows that the number of chicks flown also follows a positive trend and the season of 2010 broke the record of 138 fledgings. There is some interannual fluctuations, probably dependent on environmental conditions. However, it is clear that actions undertaken within the project have encouraged this trend.Surveillance of colonies prevents discomfort and the establishent of some habitat management measures such as cleaning and widening of nesting platforms or supplying fresh water near the colonies helps improve nesting and survival.

The NBI population in the region of Souss-Massa has grown in recent years also in the total number of individuals that, at present, is around 490 birds. These increases have been boosted, no doubt, by monitoring and conservation measures particularly during the critical period of reproduction.


In 2011 the season seems to have been also productive.